structural components, and beyond what’s known as the “survivability” wind speed substantial damage can be caused.

Understanding on a site the likely occurrences and strengths of extreme wind speeds becomes critical to ensuring that a wind turbine is suitable for a site.

The frequency and strength of storm winds varies with the region. Tropical cyclones, as the name suggests, commonly originate in the tropical latitudes and the winds affect the northern coasts of Australia, Central America, much of Southeast Asia, extending up to Japan. Annually, these regions experience maybe one or two tropical cyclones. In the midlatitudes, however, there are regular frontal storms with high wind speeds. These are usually due to low pressure systems above regions like Europe, which cause extratropical cyclone formation, as illustrated in Figure 3. 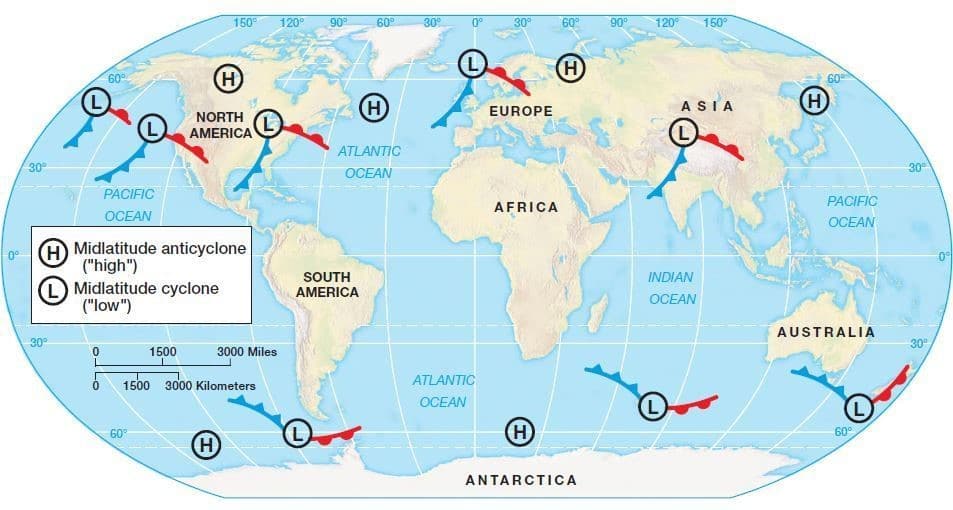 Knowledge of how likely it is that the suriviability wind speed would be exceeded is essential for investors and insurers of a wind farm in order for them to estimate the downtime and possible damage to machines, since most wind turbine failure is associated with high wind rather than no wind conditions[1]. This leads us to the (literal) million-dollar question: how are extreme wind conditions quantified and predicted? According to the IEC standards for wind turbines[2], this is answered by two highly simplified values: Vref and V50. Vref is the 10-minute extreme wind speed with a return period of 50 years, meaning that the Vref value for a site is the wind speed (sustained for 10 consecutive minutes) that has a one-in-fifty-year chance of occurrence (or exceedance). V50 is the 3-second sustained gust value with a return period of fifty years. The gust would most likely occur as a momentary increase within the 10-minute extreme wind speed. These two quantities are usually estimated for a windfarm when assessing extreme winds and lays the basis for insurance claims.

Prediction of these extreme wind speed values is normally carried out with the help of on-site mast data. The time period between setting up of met masts on site and starting the conception of the wind farm is at the very minimum 12 -15 months. It is highly risky to rely on such a short time period of data to find the 50-year extreme wind speed values. Short observational periods lead to high uncertainty in forecasts. For this reason, Wind Pioneers makes use of a combination of site data and reanalysis data which is publicly available. Reanalysis data is historical climatic observational data that has been assimilated over an extended period using a particular assimilation scheme. It is available for long time periods, extending to ~30 years in the past. The data are obtained via remote sensing and satellite observation techniques. Two of the most reliable reanalysis datasets are the ERA5[3] and MERRA2[4] datasets. Reanalysis data divides the globe up into a set of grid points and data is made available for each “node” or grid point. This means that a windfarm would not necessarily have a reanalysis data point and so Wind Pioneers ensures bias reduction by averaging and scaling data from the four nearest nodes. Using correlation with the reanalysis data and long-term analysis techniques, the site data is then scaled to generate a longer period of data with which we can estimate extreme wind speeds. 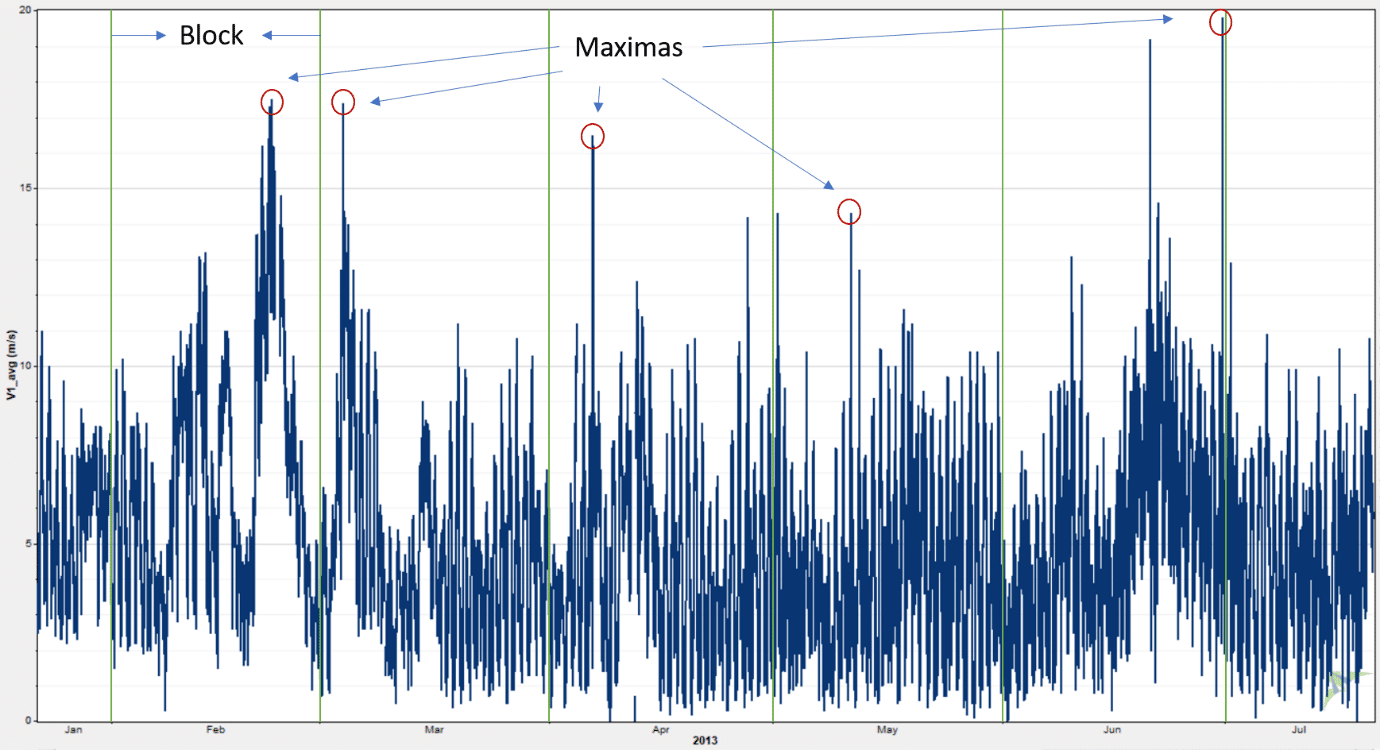 Figure 4. An example of the block maxima method. The red circles indicate the ‘peaks’ in each block. The blocks are of one month time periods.

The most basic of these is the block maxima method. In this process, the data is split up into “blocks” of pre-defined sizes and the maximum value in each block is identified, as shown in Fig. 4. These maxima are then fit to a statistical distribution curve which is extrapolated to find the extreme wind speed values for different return periods.

The method of independent storms uses a similar approach except that it defines peaks as any wind speeds above a defined threshold, without splitting the data into blocks, and uses that set of peak wind speeds in the curve fitting process. 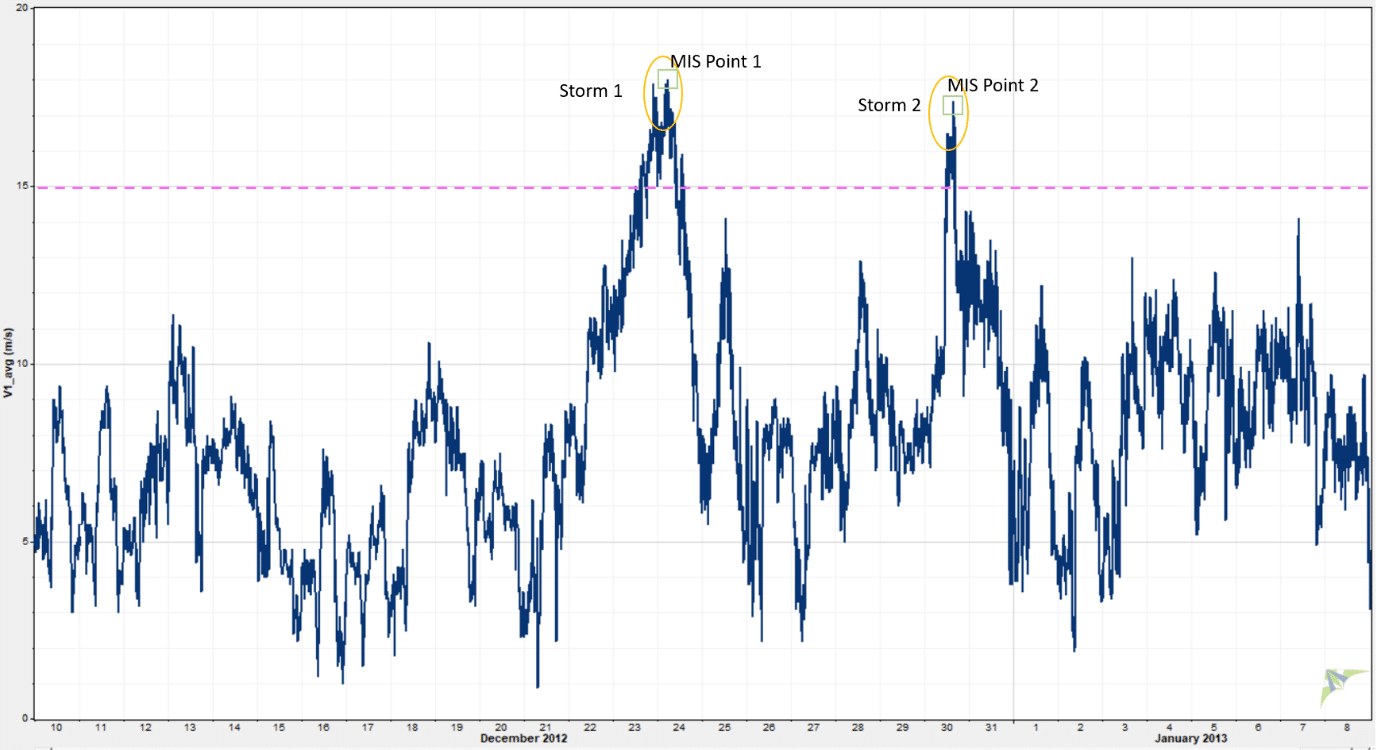 Figure 5. An illustration of the MIS method. The threshold wind speed is indicated by the pink dashed line. The MIS peaks are identified to be the maximum value in each ‘storm’ event, where storm events are separated by a minimum of 48 hours.

The EWTS II method is different from the other two methods in that it does not rely on observed maximums; rather, it uses a fixed plot of the Weibull scale parameter, k, of the dataset versus the ratio of the Vref to the average of the wind speed data (Vave). From a known k value for the data, we can then find the corresponding ratio of Vref to Vave and derive Vref from the mean. The 3-second gust values, V50, are then found from the Vref values obtained using the WMO conversion guidelines for cyclone conditions. 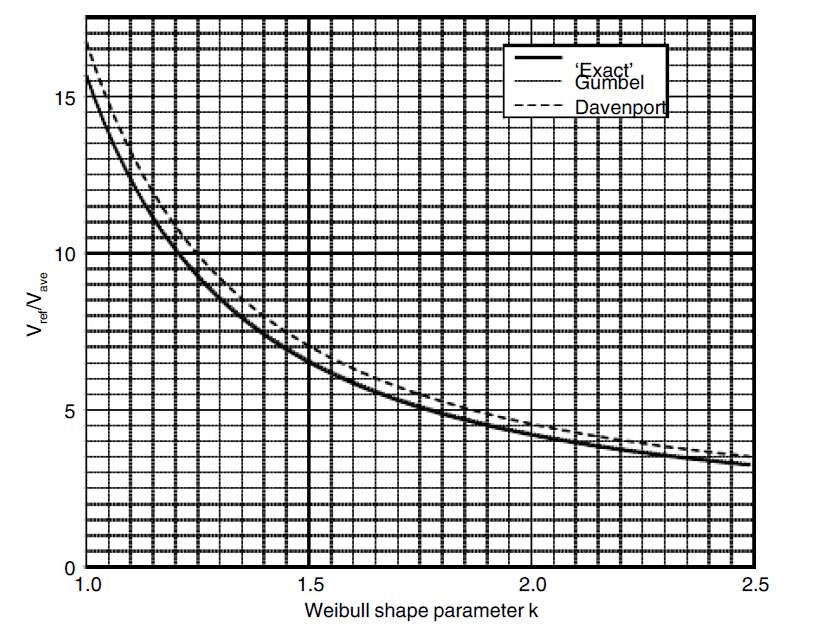 Figure 6. The graph between the Weibull shape parameter k and the ratio Vref/V50. This graph is the basis of EWTS II calculations.

Extreme wind analysis remains complex and fraught with uncertainty, and as such, new methods are constantly being developed to bring more reliability into calculations. Some of these, like the spectral correction method developed at DTU, are proving to be more useful than current industry-standard procedures and may make their way into our work in the future.

Here’s Anjana’s, her role as a Climate Researcher ranges from working on models that simulate a few thousand years of climatic phenomenon, to having carried out atmospheric remote sensing and oceanography work in the middle of the Atlantic, she brings a unique viewpoint to an industry that deals with timescales of hours and days globally. When she’s not typing away at her laptop, you can find her watching art films or listening to Jazz.